When Bruce would not shut up about the murder of IRS Agent Liston Smith and the hit list. The feds recruited a jailhouse “witness” named Neil Keenan and offered him his freedom in exchange for a few lies. They had Keenan write a false statement that Bruce was plotting the murder of his ex girlfriend’s new boyfriend, both of whom were Metro Dade police officers. If the scheme worked, Bruce would be locked away for 15 years, and nobody would listen to the rants and pleas of some guy who tried to kill a cop. The problem is the truth and misfortune both got in the way and really pissed off a fairly honest judge named Sydney Shapiro in Miami.

You see, the day that Neil claimed Bruce supposedly admitted waiting for his victim to come out of his apartment to be killed, Bruce was actually on a date with a beautiful girl named Mirriam Rodriguez of Miami at Everglades National Park where tragedy had struck twice for the couple. While riding their bicycles through the park, a huge dragon fly the size of a pigeon landed on Mirriam’s shoulder and scared the beejesus out her causing her to crash her bike, skin here knee and sprain her ankle – all in less than 1 minute. Anyone who heard her scream would think she was having her limbs ripped off. Big bugs that buzz do that to a girl. 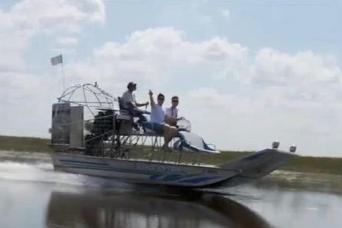 Since that accident killed the rest of the bicycle hike, Bruce tried to make lemonade from the lemons and suggested they take an airboat tour of the Everglades and look at the wildlife – mostly deer, alligators, racoon, and a hundred or so variety of birds. Still in pain, she agreed that might be fun, so they found a big country boy who rents airboats and they asked him for a guided tour. For $200 an hour he happily agreed. This would be a big mistake, but one that Bruce would be very grateful for a few weeks later.

Neither Bruce nor Mirriam knew the good old boy owner/driver of the airboat had a few beers to many and although he told some great jokes and kept them entertained, he had lost his sense of speed and direction. Because the airboat was powered to carry up to 8 passengers and only Bruce and Mirriam were on it, they sped through the tall grass at 70mph. It was exhilarating and…a bit dangerous.  The driver did not see a sandbar and WHAM! They they sat stranded on a sandbar for 3 hours surrounded by curious alligators and mosquitoes that really were.  They would sit there as the sun would set – more than 5 miles from any other human being. When it grew dark and the airboat was missing back at dockside, the other good old boys realized something was wrong and launched a search party of 3 airboats to go look for the trio. It was about this time that federal witness Keenan swore under oath that Bruce was lurking in a Kendal apartment building parking lot waiting to take out a cop. If Neil was believed by a jury, Keenan would be released seven years early from his 10 year sentence.

By the time they were found, Bruce and Mirriam swore they met every single mosquito in Florida and the hundreds of bumps all over their bodies gave testament to this. They arrived back at the dock about 8:00pm and about 9:00pm when Bruce dropped Mirriam at her home. It would truly be a memorable day for every one, but for all the wrong reasons.

Thus when Bruce was arrested a few days later and ended up in an attempted murder trial, he was grateful that Keenan picked that particular day as the murder date. Mirriam and the airboat driver told a Miami jury the above story and Mirriam still had the scar on her knee from the bicycle spill. Bruce still had the receipt from the airboat ride.  Shortly after the three testified about their adventure in the Everglades, the trial came to an end and so did Keenan’s lies. The jury took all of 12 minutes to return a verdict of “not guilty” and Judge Shapiro chastised the prosecutor for not checking out Bruce’s version of events for that day. Although Shapiro made it clear that Keenan perjured himself, no criminal charges were brought against him. Why?

The Keenan affair was just one of 4 times the feds tried to have Bruce arrested with fake crime in order to hide real ones. When people use the law and the courts as a political weapon, it is called “Abuse of Process” and it is a felony crime that commands five years in prisons. Yet it is a crime that is almost never prosecuted. Why?  Because it would draw publicity and scrutiny to the entire criminal justice and judicial system from the public and media. But herein lies a very big problem…

Our prisons are full of Neil Keenans – people serving 10-20 years sentences who would say they saw Mother Theresa giving the Pope a blow job if gets them out of jail. In the book Bruce wrote he wrote over 30 pages about the “witnesses for hire” and he even interviewed one named Chester Zukowski of Florida who testified in over 50 trials for the federal prosecutors who used to ask him to rehearse his testimony and memorize scripted responses to questions they would be asked on the stand.

The point I am trying to drive home here is that if Uncle Sam needs you to be guilty of a crime in order to discredit you, they will find a way to make it happen. The same was done to Chip Tatum and Richard Brennecke who also worked  many years for the government and witnesses dozens of crime. These fake criminal charges are standard operating procedures when you start implicating high ranking government official at the Governor level or higher. Judges know the score and pretend they are shocked and surprised when these actor witnesses get tripped up in their lies.

This is why Bruce claimed in his book that up to 15% of prisoners locked p in our jails today may actually be innocent as well as those like Bradley Manning who were intimidated and or psychologically tortured into pleading guilty. So who was Bruce implicating in crimes back in 1985-1986?  Read Part 2 of this 6 part blog series.

the truth exposes the lies of government officials. 35 Years?

This is not Nazi Germany – Or is it?